The National Association of Travel Agents Singapore (NATAS™) was established in 1979. Today, NATAS is one of the leading trade associations in Singapore representing over 400 licensed travel agents. NATAS members command some 80% of the market share whether it is in the Outbound, Inbound, Air Transport or Surface Transport sectors.

The dispute resolution process between consumers and our members comprise of NATAS''s attempt to forge a settlement (1st stage) as well as escalation to a Regulatory / Dispute Handling Organisation by the consumers (final stage).

Regrettably, NATAS™ is unable to resolve commercial disputes between you and your travel agent or dictate the travel agents to pay compensation to you. We are however, able to link and connect you to theCustomer Service Personnel in the various agencies. Unfortunately, not all travel agencies in Singapore are members of NATAS, therefore, we are unable to assist you in your dispute with non-NATAS members. In such cases, you may approach the Regulatory / Dispute Handling organisations directly for assistance. 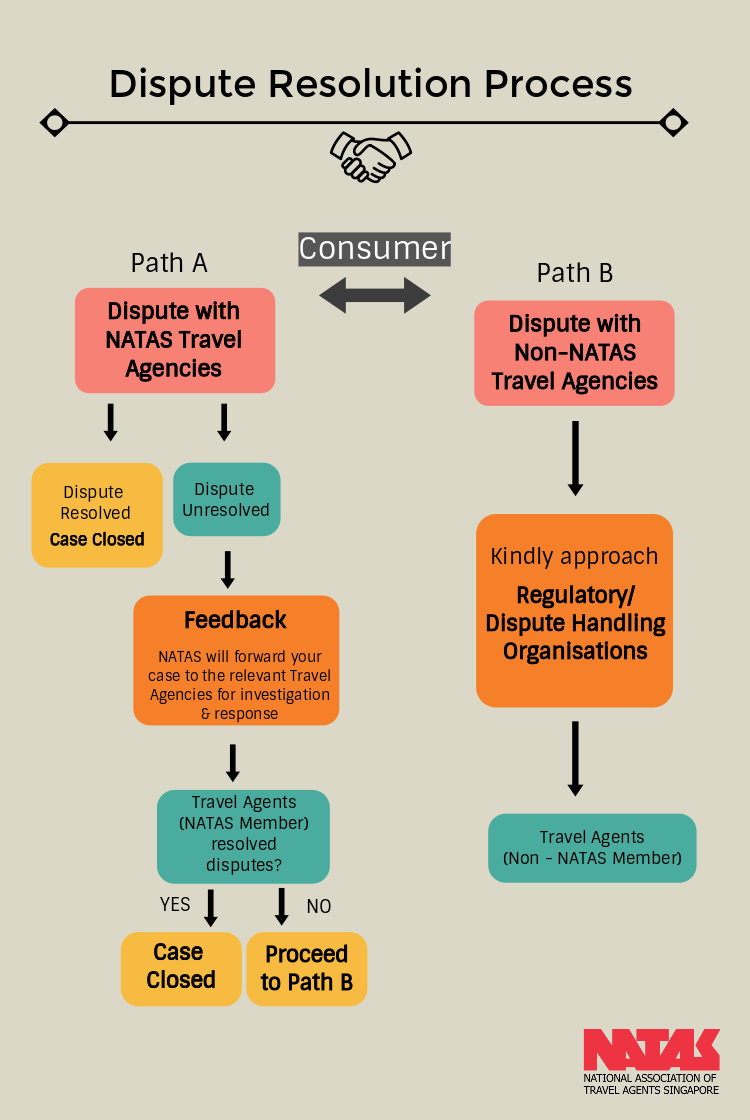 
(1) Settlement between Consumer & Travel Agent (applies to members of NATAS only):

When a complaint is first received, it is recorded in the NATAS case file and then forward to the Customer Service Personnel of the respective travel agency. The complainant and the travel agent are encouraged to resolve the claim/dispute in an amicable and fair manner.

How to file a complaint with NATAS?

•  If necessary, NATAS Feedback will request you to provide supporting documents, such as Booking Form, Receipts, Air Tickets, T&C and any documents which may be useful to the travel agent for their investigation.

When a dispute cannot be settled by mediation, the complainant has the option to approach a Regulatory / Dispute Handling Organisation to handle his/her case against the travel agent.